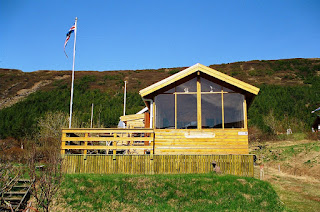 I've started a YouTube channel featuring songs that I've written and recorded over the years. I've always written music, and during my twenties I worked as a musician, paying for my postgraduate studies in saga literature with gigs around Brisbane.


When last living in Iceland, some ten years ago, I became good friends with musician Halldór Gunnar Pálsson, and his brother Önundur, a sound engineer. Together we recorded songs in a little summerhouse in Tungudalur in the Westfjords, including the song, "Rain on the Sea".

Other songs were recorded and mixed in Flateyri, a tiny village in the Westfjords where Halldór Gunnar and Önundur grew up. Önundur had converted an old fish-oil storage tank into a studio. Other times we used the local community hall, and its slightly out-of-tune piano, as for "Into Cold Water", which features the piano at the very end.

﻿
"Rain on the Sea" and "Into Cold Water" are the first two songs that I've posted on the channel. I wrote the words to both, and did the singing, too. Halldór Gunnar co-wrote the music.

There'll be more of our songs, and others, to follow.﻿